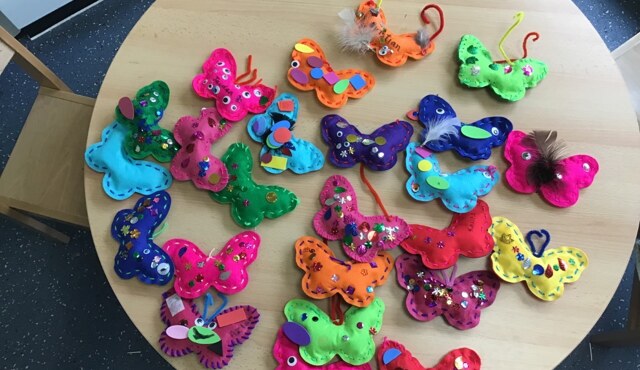 A creative and busy half-term in Australia AM; Creating our own aliens; Counting space rocks and learning to sew for the very first time (felt butterflies). In Australia PM we have been doing spaced themed arts and crafts. We enjoyed making alien headbands, aliens from clay and flying saucers. We have been learning to share resources and celebrate each other’s creations. Andorra have been showing excellent concentration and control while sewing their felt butterflies. They have also shown excellent cutting skills when making their rockets during our Space topic.

The reception children have been learning all about 2-D and 3-D shapes. They're experimenting with 2-D shapes and how they can fit together to make 3-D shapes. They worked as a team to create their 3-D shapes.

This half term we have been learning about carnivores, herbivores and omnivores. We investigated animal poo to find out about their diet!! We sorted animals according to what they eat and we went on a school trip to Beale Park to see some real wild animals. The children also learnt how to draw each of the animals in their fact files which helped them to describe some of their distinctive features.

This term has been a very busy one for year 2, as the children have been preparing for and completing their KS1 SATS papers and we are SO proud of their fantastic achievements and perseverance!

Finally, to end the term the children visited Wisley Gardens where they looked at different plant habitats in the glasshouse, observed fruits and vegetables from around the world growing in the World Food Garden and learnt lots of new facts in the RHS Hilltop Learning Centre! It was a fabulous day!

Year 3 children have been using atlases to locate countries that have large areas of rainforest.

We identified different plants in the playground, we labelled the different parts and identified their role. W also started our experiment on what plants need to grow and if they can grow in different conditions. We planted our runner beans, which was great to see them grow!

In year 4 our students have been learning about the British countryside. The children have been exploring and have grown an appreciation for the countryside through literature, art, and many more activities. Year 4 have explored the text 'Wind in the Willows' by Kenneth Grahame. Our students have had an insight into the lives of the characters: Mole, Ratty, Badger and Toad. They have focused on the habitats of each character and how it reflects different personalities. Our students have looked at the poems 'The river' by Valerie Bloom and 'Daffodils' by William Wordsworth. Our students explored poetry using different strategies and have had fun creating: free verse, rhyming and shape poems. Our year 4 students have been exploring rural and Urban areas of the United Kingdom. They have began to identify physical and human features of geographical locations and have even had a live debate about whether the rural areas of England should be preserved and why. Our year 4 students have learnt about features including British rivers, plants, flowers, fields etc. The students have models of the riversides, have grown grass & flowers and have made dioramas.

The children shared their work through an exhibition to the rest of the school. This included anime art and the skills and steps learnt to lead to the final drawing of an anime character. They also had children play the arcade style games they had created.

Year 5 have also been on an exciting trip to Waddesdon Manor! Here, the children learnt about the history of the property, and its links to the arts through exploring the materials, furniture and design of the building (and its interior). The children thoroughly enjoyed the trip, as it presented them with a unique learning experience which we hope they will remember for many years to come!

Finally, children have been studying the mysterious stencil artist Banksy, as well as the numerous pieces of work of his that are recognised around the World. This has been a golden thread which has been weaved across our curriculum this term, as children have created their own stencil art in Art lessons, and in English lessons we have been looking at writing biographies – and who better to write one about than Banksy!

Year 6 have worked so hard last term in preparation for their SATS tests and we are so proud of them. We simply could not be prouder

of them. They all put so much effort into their revision and approached the tests with such a positive mindset. They have all shown so much progress and are such a credit to the school. They also continue to show fantastic behaviour and act as role models to so many of the younger children in the school.

They are now preparing for their Enterprise Project. They will be working in House Groups to make many different products to sell and running various fun-fair like activities.

They have learned some key vocabulary around business, such as: Profit, loss, revenue, income. In addition to this, they have begun their advertising campaigns by designing their company logos and creating advertising posters and flyers.

We look forward to their sales days next term and seeing how much money they can raise!

This half-term will also see the end of year Leavers Disco along with a very special Leavers Assembly Show for the children and their families.